Local produce, all the time 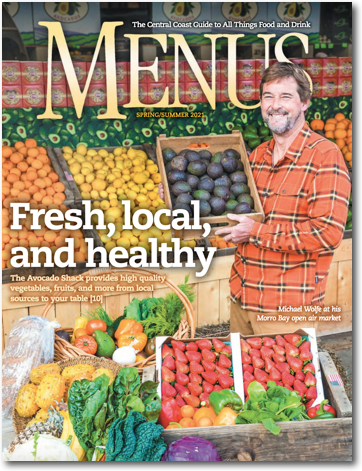 Avocados are definitely the Avocado Shack in Morro Bay's thing But not just any old avocados. The avocados on these shelves are sourced from the surrounding hills. Avocado Shack owner Michael Wolfe said you'll never find an avocado sourced from out of the country in his produce stand.

"We've got the best avocados in the United States right here from San Luis Obispo to San Simeon," Wolfe said. "I'm able to have local avocados here every day without having an avocado from Mexico come in this building."

It's nothing against Mexico. It's just that the fields and orchards on the Central Coast grow high-quality delicious produce. To Wolfe, it doesn't make sense to source fruits and vegetables from elsewhere.

Wolfe worked as a produce manager in local grocery stores for 20 out of his 40 years in the produce business. He started in Los Osos at Williams Bros. in 1983. In 1992, Vons acquired the coastal grocery store chain. Wolfe worked for Vons stores all over North County, as well as Spencer's Fresh Markets and Cookie Crock Markets. "Over the years, these guys have gone to sourcing outside of the United States," Wolfe said. "And I was like, think I could do it better."

He used the thing that had been eating at him for decades as inspiration to open a produce stand of his own in October 2019. The Avocado Shack sells more than just avocados. You can also find Hearst Ranch beef, Santa Maria strawberries, tomatoes from Arroyo Grande's SLO Grown Produce, Straus Family Creamery dairy products, and more. What doesn't grow hyper-locally, Wolfe sources through the connections he made as a produce manager, starting with Veritable Vegetable. The California-based, female-operated company sources organic produce from small farms and delivers it with a certified green fleet.

"I'm here to promise that I'm going to get it local. And if I can't find it, it will be fair trade, farm certified, and all organic," Wolfe said. "Big ag is not our thing."

In addition to working local produce sections, Wolfe raised three kids in Cambria, and has worked the land, farming both tomatoes and avocados. He said all of that inspired his philosophy on sourcing locally grown, as organic as possible, produce "I just saw how difficult it was for our local farmers, who I know and am friends with, to get their awesome produce into local stores. And it's just being shipped out," he said.

He believes that the trust he's built with his customers, some of whom have been purchasing produce from him for 30 years, is vital to his success. But also to his core, which is why the Avocado Shack has practiced safe social distancing and extra sanitation since the beginning of the pandemic "The feeling of providing healthy ingredients to improve and retain my customers' health-my friends, my neighbors. It's real personal. I feel like it's being a pharmacist, it's just not refined," he said. "People trust me. People put this food in their bodies."